Lethargy. Procrastination. Whatever you want to call it – it’s never a good thing. No one ever looks back and wishes they had put things off a bit longer. And no one wishes they had chosen to do nothing with their time. In fact, most of our regrets stem from laziness and procrastination. We wish we had taken a stand instead of backing down. We wish we would have made more of an effort or spent more time on the things we truly cared about. And we long to go back in time so we can get our act together sooner.

So my question is this: if we know that laziness is never a good thing, why don’t we do something about it? 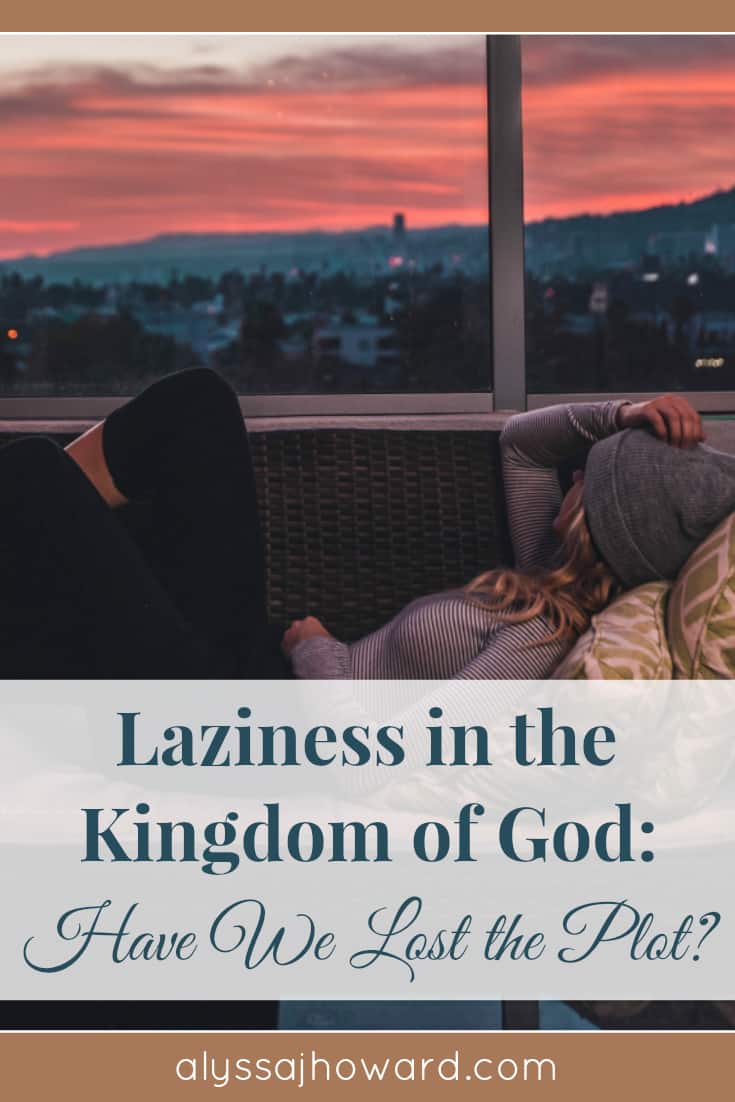 The answer to why we continue our laziness is most likely laziness itself. We don’t make an effort because it’s hard or we don’t feel like it. We lack motivation and drive. It’s easier to sit and wait things out than it is to be proactive and get things done.

I don’t know about you, but I personally want to kick laziness to the curb! It won’t be easy, but I don’t want to look back on my life with regret. Laziness and procrastination always lead to regret. Period.

Lazy people want much but get little, but those who work hard will prosper. – Proverbs 13:4 (NLT)

One of my favorite songs growing up was a song called “Lost the Plot” by the Newsboys. The song describes a man who is nonchalantly asking Jesus to bring him something from the refrigerator when He comes back again.

The point is to describe the complacency we often allow ourselves to feel as Christians. We get lazy. We get comfortable. And we forget why we’re following Christ in the first place.

No discipline is enjoyable while it is happening—it’s painful! But afterward there will be a peaceful harvest of right living for those who are trained in this way. – Hebrews 12:11 (NLT)

Being a Christian isn’t easy. I’m not sure where we got the idea that once we are saved the hard part is over. Jesus came to this earth to establish His Kingdom. Then He gave us the keys and told us to get to work.

Jesus gave us a mission, one that leaves no room for laziness.

We aren’t just called to a holy life. Our job is not simply to obey the rules and keep our slates clean and free from sin. We are the body of Christ. We are His hands and feet on this earth. And we have a clearly defined mission.

Jesus told us to seek first His Kingdom and to pray that God’s will would come to pass on earth as it is in heaven. But so many of us have “lost the plot.” We’ve lost our sense of purpose. We’ve forgotten the ending to the story.

If you look at God’s Word from beginning to end, the plot isn’t simply about us and forgiveness. Yes, that’s an essential part of our story, but it ends with God’s Kingdom. Our happily ever after is God living among His people – the people He deeply loves.

We all play a role in His plan, and I want to do my part. I don’t want to be a Christian who has lost the plot… rather I long to be a part of it. **Photo by Roberto Nickson on Unsplash

16925shares
« Putting on My New Nature: My New Year’s Resolution
Treasure of God: Ridding Ourselves of Low Self-Worth »