Spiritual warfare is a common phrase in most Christian circles. It’s used to describe the battle between the enemy and the people of God. We often think in terms of Satan’s “fiery darts,” putting on our spiritual armor, and coming against the enemy with the truth of God’s Word just like Jesus did when He was tempted in the wilderness for forty days. It’s the understanding that there is a spiritual battle and we, as Christians, are soldiers in this war. 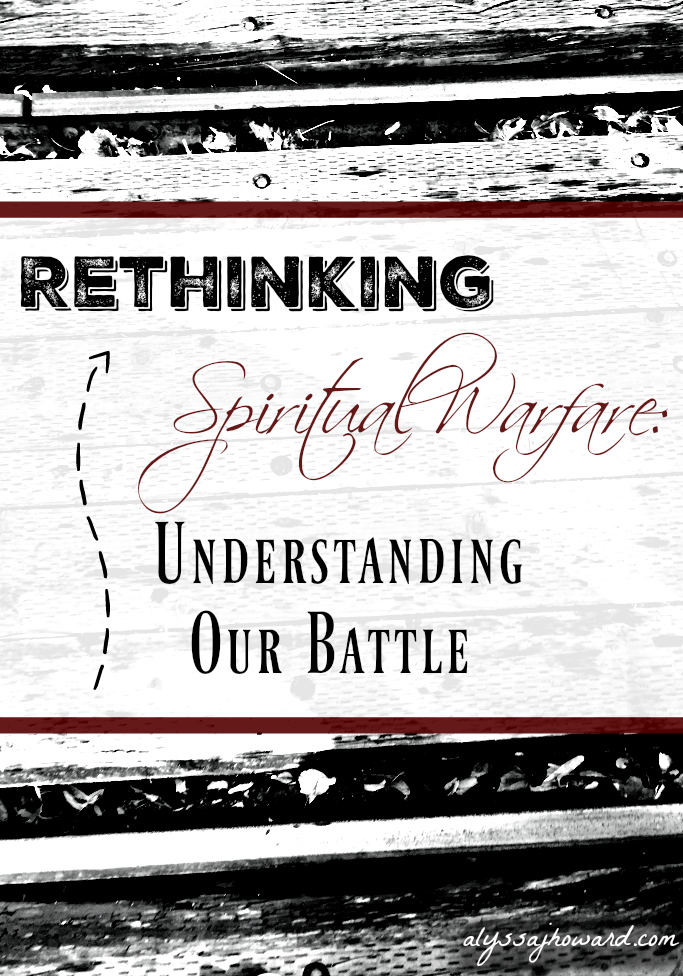 I’ve been taught so many concepts regarding spiritual warfare, but it wasn’t until recently that I began seriously studying everything the Bible has to say about it. I began to realize that the battle may, in fact, look differently from what I’ve always imagined in my mind.

Our job as believers is to fight from victory, not for victory. But what does that mean exactly? The truth is that Jesus already overcame every power of darkness – including sin and death. Since the battle is already won, our job doesn’t include “winning the battle” but rather our job is to stand firm in that victory. We do that by reminding the enemy of the truth (that he lost) and by not allowing him to convince us that he somehow still has the upper hand.

You see, the enemy wants you to believe he still has power. But isn’t that true of all enemies in warfare? Even without weapons, they want you to believe that they could defeat you if they wanted to. He is known as the father of lies for a reason… he lies and distorts the truth.

You are from God, little children, and have overcome them; because greater is He who is in you than he who is in the world. – 1 John 4:4 (NASB)

When it comes to spiritual warfare, the fight isn’t fair. You have the upper hand.

The enemy has been defeated, but did you know that he’s also been disarmed?

When He had disarmed the rulers and authorities, He made a public display of them, having triumphed over them through Him. – Colossians 2:15 (NASB)

Notice that Jesus also made a “public display” of him. First century Christians would have read this passage and understood it based on the customs of their day. When an enemy was defeated by a Roman general, they were pulled behind the victor’s chariot through the streets – chained, disarmed, and naked. It was a humiliating moment, to say the least, and it would often be accompanied by a victorious party of epic proportions.

So why do we still have an enemy to fight if he’s already been defeated, disarmed, and humiliated? He knows his fate on judgment day and is now doing all he can to thwart God’s plans (which we know won’t work!) His goals: keep people out of the Kingdom and to render those inside of the Kingdom ineffective in their faith.

But remember, he can’t do anything to take away our salvation or separate us from the love of God. He can, however,  get us so worked up, so self and worldly focused, and so lost in our identity as children of God that we are incapable of doing anything good for the Kingdom.

But what about the “fiery darts” of the enemy mentioned in Ephesians 6? Isn’t that weaponry? Yes and no. The enemy has been disarmed, yes; but he still has the ability to lie. Notice that Ephesians 6 says that our shield of faith has the ability to “quench” these darts. It’s not a typical shield that simply keeps the darts from hitting us. It’s a shield that literally puts out the fire and keeps the dart from having any ability to harm us whatsoever.

For whatever is born of God overcomes the world; and this is the victory that has overcome the world—our faith. – 1 John 5:4 (NASB)

Here’s the truth: the enemy isn’t scary. You are.

As a child of God, the enemy is afraid of you and all that God has enabled you to do. You have no reason whatsoever to be afraid of him.

For though we walk in the flesh, we do not war according to the flesh, for the weapons of our warfare are not of the flesh, but divinely powerful for the destruction of fortresses. We are destroying speculations and every lofty thing raised up against the knowledge of God, and we are taking every thought captive to the obedience of Christ. – 2 Corinthians 10:3-5 (NASB)

Isn’t the devil a “roaring lion” looking for someone to devour? No. The Bible says that he is prowling like a roaring lion. He lurks in the shadows and looks for opportunities to pounce, but that doesn’t mean he has the power of a roaring lion to actually succeed against God’s children. Remember: you have the Lion of Judah living inside of you! The Bible says that all we have to do is resist the devil and he flees – as in he literally runs away from you! (I’m pretty certain that resisting a real lion wouldn’t work the same way!)

Submit therefore to God. Resist the devil and he will flee from you. – James 4:7 (NASB)

Be of sober spirit, be on the alert. Your adversary, the devil, prowls around like a roaring lion, seeking someone to devour. But resist him, firm in your faith, knowing that the same experiences of suffering are being accomplished by your brethren who are in the world. – 1 Peter 5:8-9 (NASB)

Behold, I have given you authority to tread on serpents and scorpions, and over all the power of the enemy, and nothing will injure you. – Luke 10:19 (NASB)

The enemy only has one weapon – lies. But God has equipped you with the most powerful weapon of all – His Truth.

Have you ever noticed that in the armor of God (Ephesians 6) every single piece of armor is defensive except for one? You have one very powerful offensive weapon – the sword of truth. Our battle with the enemy is more about truth vs lies than anything else.

Picture this: You – fully armed in God’s armor, equipped with the most powerful weapon in the world (truth). The enemy – no weapons (except for his lies) and already humiliated by his defeat at the cross. Not much of a battle anymore is it.

Yes, the enemy will still try to fight using his lies. But if you are equipped with the truth and stay rooted in that truth while abiding in Christ, the enemy has no power whatsoever. In fact, it becomes a little like David vs Goliath… only Goliath is the good guy and his victory is already secure. 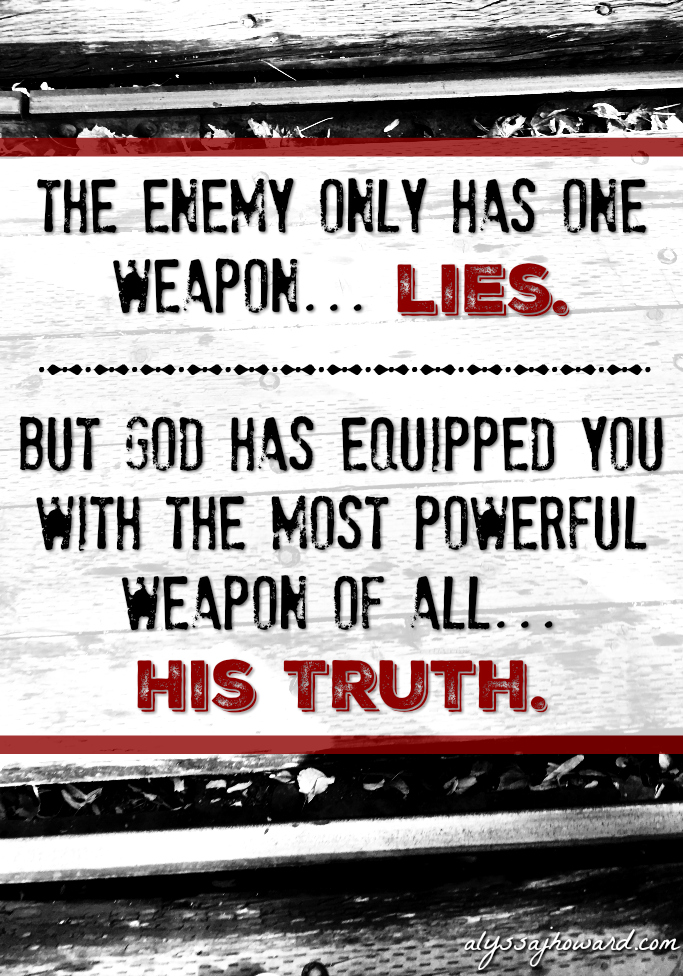 1515shares
« 4 Christian Terms That Are Often Misunderstood: Sin
10 Bible Verses for When You Face Anxiety » 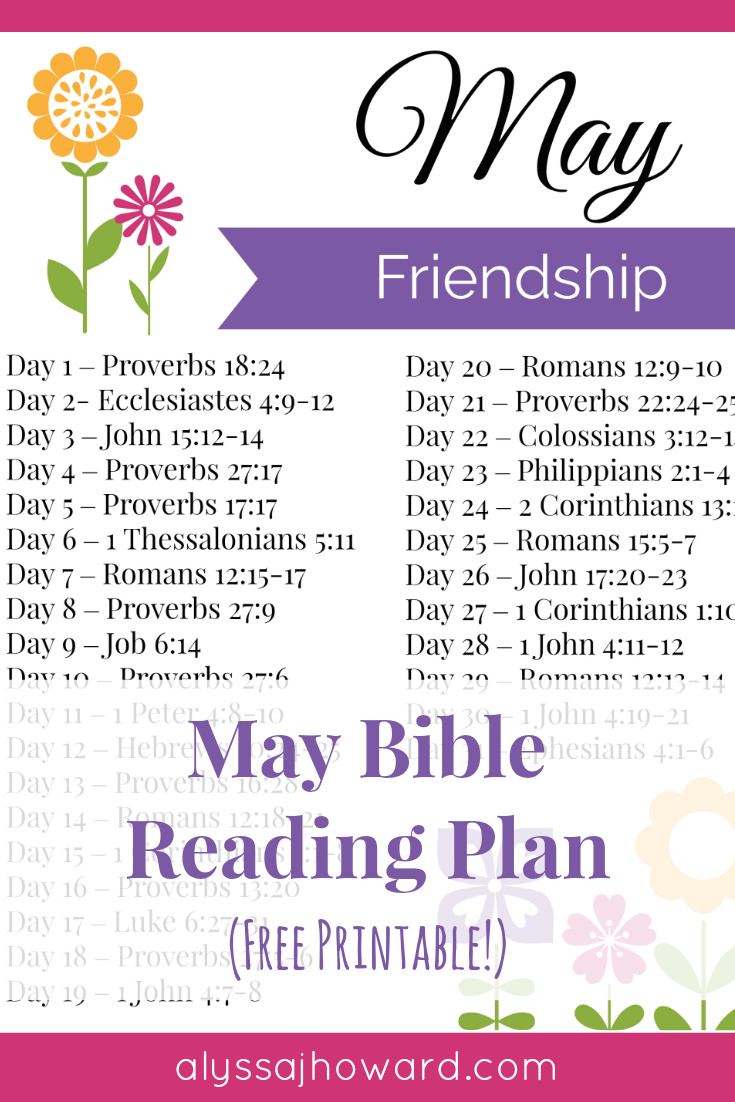